As part of their efforts during the Civil Rights Movement, black Tuscaloosa residents attempted to remake the public landscape by naming new buildings after prominent African Americans. As pioneers in public school education, activists considered Jeremiah Barnes and his son Benjamin Barnes as appropriate namesakes for enshrining in brick and mortar. While failing to name the segregated high school after Jeremiah Barnes, activists succeed with the segregated YMCA chapter building. The Alabama Citizen, a black Tuscaloosa newspaper, documented their efforts.

This Alabama Citizen editorial proposes naming the new African American high school after Jeremiah Barnes. Instead of Barnes High, as desired by the African American community, the city chose Druid High when the school opened in 1955.

As the day for beginning construction on Tuscaloosa’s $1,500,000, Negro high school, approaches, our minds centers for a few moments on a fitting name for this proposal monument to education. To us, it appears that a school plant like the one proposed should bear the name of some local resident who has made a worthy contribution to Negro education.
With this in mind it becomes easy to turn back the pages of local history to that period shortly after Emancipation where we see very clearly etched in the sands of time the life and work of the late Jeremiah Barnes, founder of Negro education in Tuscaloosa. It was this great citizen who opened the avenues to higher education to the dusky-hued children of ex-slaves.
The task of our first Negro teacher was not an easy one. The white community did not look with too much favor on higher learning for Negroes. Funds for the operation of Negro school were very meager. The training and preparation of the teachers were of very poor quality. Many of the parents of that day did not understand education and its advantage and would not support it. In the face of all these adversities, Jeremiah Barnes carried on devoting his entire life unselfishly to the responsibilities of training the youth of his day.
To give the new school the name of this great Tuscaloosan appears both proper and fitting. The CITIZEN urges its readers to ask the school authorities to link the name of this pioneer in our local school system with that of the new school so that it may ever serve as a living reminder of one contributed so much to our progress.

Remembering Benjamin Barnes with the YMCA 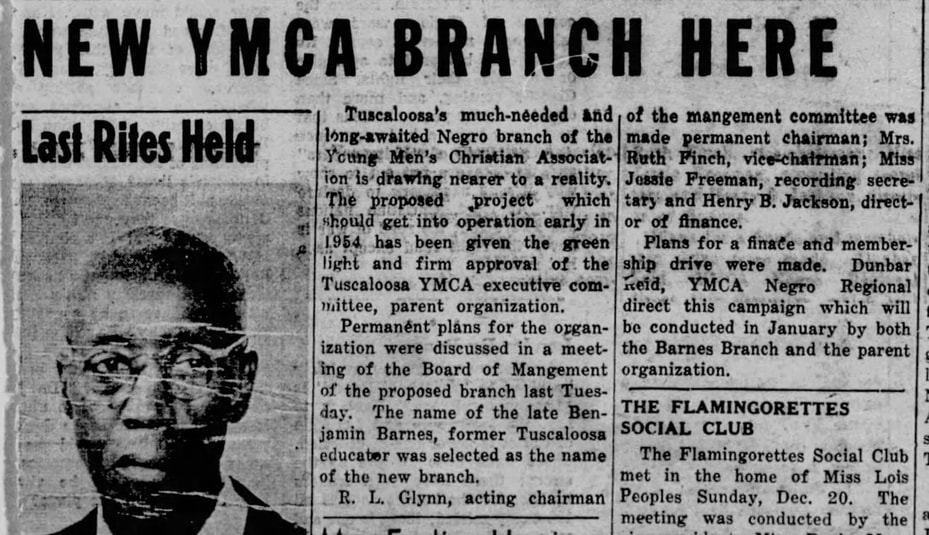 While failing to official name the high school after Jeremiah Barnes, African Americans successful enshrined his son's name as the
official branch name of the city YMCA branch.

Tuscaloosa’s much-needed and long-awaited Negro branch of the Young Men’s Christian Association is drawing nearer to a reality. The proposed project which should get into operation early in 1954 has been given the green light and firm approval of the Tuscaloosa YMCA executive committee, parent organization.
Permanent plans for the organization were discussed in a meeting of the Board of Management of the proposed branch last Tuesday. The name of the late Benjamin Barnes, former Tuscaloosa educator was selected as the name of the new branch.
R. L. Glynn, acting chairman of the management committee was made permanent chairman; Mrs. Ruth Finch, vice-chairman; Miss Jossie Freeman, recording secretary and Henry B. Jackson, director of finance.
Plans for a finance and membership drive were made. Dunbar Reid, YMCA Negro Regional direct this campaign this campaign which will be conducted in January by both the Barnes Branch and the parent organization.