Enslaved Women at the University of Alabama 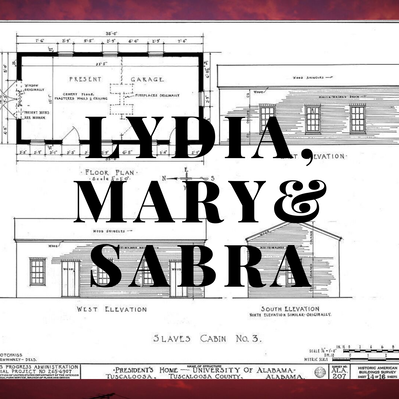 Close readings of Manly’s diaries and other surviving sources reveal additional enslaved women and a tapestry of their campus experiences.  Enslaved women prepared and served meals. As domestic servants, they labored inside the President’s Mansion. They birthed a new generation. They grieved and mourned the loss of children. As the documents below suggest, they also forged community in the shadow of the “big house” at the University of Alabama.

At the first meeting of the Faculty, October 3-4, 1831, the By-laws of the Faculty were established. In the ninth resolution, the Faculty provides the guidelines for enslaved female college servants.

University of Alabama
By-laws of the Faculty

At a meeting of the Faculty on Monday and Tuesday the 3rd and 4th of October 1831, all the members present the following Resolutions were proposed by the president and adopted….

9. Resolved – That no female servant be permitted for any reason whatsoever, to enter any of the College buildings; and should any student be found countenancing in any way a violation of this regulation, he shall be dealt with as the nature of the offence may require.

In discussing a disorderly incident involving students, Manly notes the sexual violence regularly endured by Luna and other unnamed women. Emphasis is original.

On Sat. night, between 12 +1 O’clock, a party of students went in the yard of Morris and took his fowls and under some show of violence. One was very drunk. Afterward, however, the chickens were restored.
The party consists of Bugbee, Chapman, Glassell, Peck, Pharr, Wynne; and they were attended by Barnard’s servant Morgan.
This boy, Morgan, acts as a Pimp to get out Barnard’s women – especially the younger Luna; whom they use in great numbers, nightly. They then broke down the fence around the field adjacent, on the east, to the Laboratory, and dispersed to their rooms.

In early 1835, the alleged kidnapping of an unknown enslaved woman caused the University to suspend operations, conduct a full investigation and ultimately send a letter to enrolled students’ parents and guardians as well as Board of Trustee members (see RG 154). The incident also captured the attention of Sarah Haynsworth Gayle.  The first wife of Governor John Gayle and mother of Amelia Gayle Gorgas documented the initial “battle” between students, enslaved woman’s enslaver, and Sheriff in a journal entry dated February 16, 1835. Emphasis is original.

…The students and Capt. Dearing have had a battle, in which the Capt. sustained quite a defeat. It seems that a servant girl of his had absconded, and some thing led him to think that she was harbored at the College, a suspicion, which true or false, the young gentlemen were not disposed to admit. A Search warrant, Sheriff and some 15 or 20 assistants were disregarded – each door was defended, and the Capt. distinctly informed, that the Faculty was at liberty, nay, earnestly requested to carry an examination into every room in the Dormitories; but that he, and his friends were warned, that their entrance was to be effected at the risk of life. The warning was not received, and a sound drubbing was the consequence; deserved, as I do believe, were it only for the want of judgment it betrayed. They are, in general, a lawless set; but I can but hope that the way in which this truly scandalous charge was met, argues a sense of honor, and what is due to the opinion of society, which may be received as an earnest of something better. There is a substance where there is a shadow….

When Basil Manly became President, Sabra traveled from South Carolina to Tuscaloosa. She prepared meals in the surviving kitchen behind the President’s Mansion. She also delivered several children during her tenure – William (1837), Archy (1840) and Julia (1842). Manly carefully documented each birth in his annotated diary.

This day in the forenoon, our servant Sabra, was delivered of her fourth child – a son. They call its name William.
* * * *
This evening, about half past 8 o’clock Sabra had a son born which is called Archy.

* * * *
This morning some hours before day, Sabra, our Cook was safely delivered a daughter; name is Julia.

As with each birth, Manly documents each death and often provides interesting insights in the live of the enslaved person. Lydia’s death reveals her approximate age and religiosity.

This morning, at 5 o’clock, our good and faithful old servant, Lydia, died. She had a disease of the womb, which had been growing on her for years; and she had lingered for several months. But the Lord was good to her, and she was [unsure] to be sustained and cherished by her love and grace. She died in peace. She had been a member of the Baptist church, first in Charleston then in Tuskaloosa, for a member of years. Her age was about 55. She has come to me from the family of John Frierson of Charleston. She was a good woman. I had her decently interred in the burial ground of the city.

Lydia arrived at the University with her daughter in 1842. Once on campus, she labored in the President’s Mansion and birthed another daughter on Halloween 1846.

I find that my good old Father Rudolph has sent me 5 servants, old and young – viz – Jack 51 years old, Molly 49, Lydia 21, Ben 13, and Hetty, child of Lydia, born Nov. 10, 1840. These servants are part of my wife’s portion of her estate.
* * * *
This afternoon, about 6 o’clock, my woman Lydia, was delivered of a son. As usual with her, the child was born before the midwife could be got to her. All doing well, however. The child turns out to be a daughter and is named Serena.

Mary and her son William arrived at the University several weeks after Manly had accepted the position as President. Manly carefully documents their arrival and the death of her son a few years later.

This morning arrival from Charleston my negro woman named Mary and her son William. The former was 21 years of age last February. The child is fourteen months old. They were purchased of Mr. Robert C [or G] Brown of Charleston by my friend T. J. Gantt. The woman has been brought up by Col. A. P. Hayne. She was shipped from Charleston to Mobile, and came up then by the River.
* * * *
“This morning, at day light, Mary’s son, Boysey (his proper name was William) died, of the effect of Whooping cough. He was 7 years old about the 10th of February last. See entry in this book of April 10, 1838, page 125. We had not supposed him particularly sick until yesterday morning. See description of his care and prescription in receipts book. I attended to some funeral service in my house; I then had him buried in the University burying ground in the afternoon.

Purchased from a Richmond, Virginia slave trader, President Landon C. Garland secure transportation for Elisa and Elisabeth who arrive in Tuscaloosa in 1857.

…I send you two girls Elisabeth and Elisa by the request of Mr. M. Cabell by Mr. W. W. Tarry of Perry County Alabama he will Put them on the stage at Marion and send them to you at Tuscaloosa Alabama which I hope will reach you safe. Let me hear from you on their arrival. They will leave today for your place.
I am yours.
[Signed] Robert Lumpkin

[1] See James B. Sellers, History of the University of Alabama, volume one, 1818-1902 (Tuscaloosa: University of Alabama Press, 1953), 236; Alfred L. Brophy, University, Court and Slave: Pro-Slavery Thought in Southern College and Courts and the Coming of the Civil War (New York: Oxford University Press, 2016), 148; Hannah Eyob, “A History of Barnard College; Frederick A. P. Barnard and the Afterlives of Slavery,” Columbia University and Slavery Project, 2017, https://columbiaandslavery.columbia.edu/content/history-barnard-college-frederick-ap-barnard-and-afterlives-slavery.