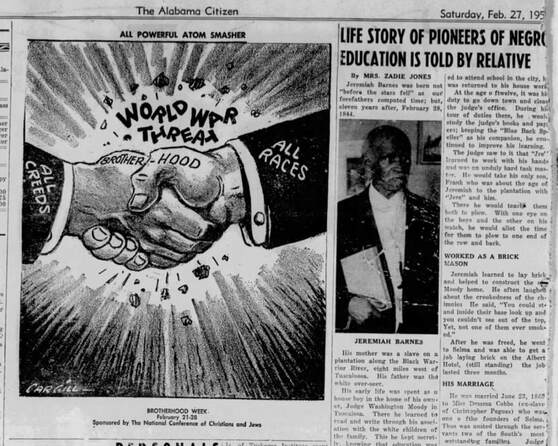 In 1954, Zadie Jones wrote a two-part biographical sketch of Jeremiah Barnes for The Alabama Citizen, a black newspaper published in Tuscaloosa. This biographical sketch demonstrates the role of oral tradition and the African American press in the preservation of African American collective memory of slavery, emancipation, and Reconstruction into the twentieth century. Amid the Tuscaloosa community’s struggle for civil and political rights, Barnes’s biography was a tool to encourage footsoldiers' persistence.

Jeremiah Barnes was born not “before the stars fell” as our forefathers computed time; but, eleven years after, February 28, 1844.
His mother was a slave on a plantation along the Black Warrior River, eight miles west of Tuscaloosa. His father was the white over-seer.
His early life was spent as a house boy in the home of his owner, Judge Washington Moody in Tuscaloosa. There he learned to read and write through his association with the white children of the family. This he kept secretly, knowing that education was forbidden to slaves.
One day while incautiously scribbling on the side of the house, he disclosed his secret, causing his removal to the plantation. There never-the-less, he continued to pursue secretly his studies.
He steadily improved his knowledge and share readily his stolen secrets with his mates. Each Sunday he would gather them under a certain tree, and there would set about imparting his newly acquired reasoning. This was where he taught his first class as a school.
After the white children started to attend school in the city, he was returned to his house work.
At the age of twelve, it was his duty to go down town and clean the judge’s office. During his tour of duties there, he would study the judge’s books and papers; keeping the “Blue Back Speller” as his companion, he continued to improve his learning.
The judge saw to it that “Jre” learned to work with his hands and was an unduly hard task master. He would take is only son, Frank who was about the age of Jeremiah to the plantation with “Jere” and him.
There he would teach them both to plow. With one eye on the boys and the other on his watch, he would allot the time for them to plow to one end of the row and back.

WORKED AS A BRICK MASON
Jeremiah learned to lay brick and helped to construct the old Moody home. He often laughed about the crookedness of the chimneys. He said, “You could [word missing] and inside their base look up and you couldn’t see out of the top. Yet, not one of them ever smoked.”
After he was freed, he went to Selma and was able to get a job laying brick on the Albert Hotel, (still standing) the job lasted three months.

HIS MARRIAGE
He was married June 23, 1865 to Miss Demma Cobbs (ex-slave of Christopher Pegues) wo was one of the founders of Selma. Thus was united through the servants two of the South’s most outstanding families. Judge Washington Moody’s and Christopher Pegues’ both honorably mentioned in Alabama History.

EDITOR’S NOTE: - We regret that space limitations prevent us from printing all of this article this week. The final installment will be concluded next week.

Barnes as a African American Leader and Institutional Builder, Part 2

The record will show that Jeremiah Barnes was elected by the citizens of Tuscaloosa as alderman. A position held in dignity second only to the major. No other Negro before or since has ever been known to hold the position in the city of Tuscaloosa.

AS A TEACHER
He taught school in 1876. He was a pioneer and one for the first to introduce the public school system.
Later he appeared before the Board of Education, took examination for Teacher’s Life Certificate, and was successful in obtaining same.

HIS ASSOCIATION WITH BOOKER T. WASHINGTON
Jeremiah Barnes and Booker T. Washington had many things in common. Both were ex-slaves, educators and both were earnest workers in the cause of general uplift of their people.
The children of the Barnes family and many others of this city attended Tuskegee Institute.
They were:
Benjamin Harrison – Class of 1891
Henry Alexander – ‘93
Jeremiah Thomas – ‘97
Jesse Ryland – 1902

Due to the fact that Tuskegee was being supported by charity, these boys would go north from time to time singing with the quartet to help raise funds to aid in the support of the institution.
The entire family were ardent lovers of music and were Nationally famous as the Barnes Family of Tuscaloosa.
Jeremiah Barnes taught his children to be respectful to the law and lead clean lives. There was never on record anything to contradict this fact.
Rev. Bedford (white) one of Booker T. Washington’s field agents, when in Tuscaloosa; always stopped at the homes of Jeremiah Barnes.
When Booker T. Washington visited Tuscaloosa, the citizens extended him the same cordial welcome and recognition as they would any white man of distinction, under similar circumstances. Tuscaloosa has long been noted for its wonderful hospitality.

JEREMIAH BARNES AS A MASON
He was Right Worshipful Chairman Committee Correspondent of the Grand Lodge A. F. &A. M. of Alabama 1897-1911, Grand Junior Warden, 1883, Grand Lecturer from 1888-1895, Deputy Grand Master, 1895-1896. He was Senior Warden from 1886.
For twenty years chairman of the committee on foreign correspondence. He was a member of City Lodge No. 2785 G. U. O. of O.F.
Twice he was elected Deputy Grand Master.
As an accomplished organizer and worker for the Lodge, he received a commission as colonel of the 9th District under General James W. Jones April 11, 1908.
He occupied a front rank, not only among the brotherens [sic] of Alabama, but throughout the Masonic world.

BARNES AND THE CHURCH
Last but not least, Jeremiah Barnes was a valiant solder of the cross; a member of the AME Zion Church in 1866. He was a Sunday School Teacher and Superintendent, chorister and organist, for forty years. He taught himself to read music as well as play the organ.
To the world he supplied an example for the old and young alike to follow. It is just another illustration that life with people is as with vegetation. The earth gives generous measures to proper cultivation.