Roy Wilkins Speaks at The University of Alabama:  The Crimson White coverage

As part of the Emphasis ‘68 lecture series, Roy Wilkins, longtime civil rights activist in the NAACP, discussed issues of race relations and challenges confronting the nation. The coverage highlights the generational divide among activists regarding leadership, strategy, and the role of Black Power. 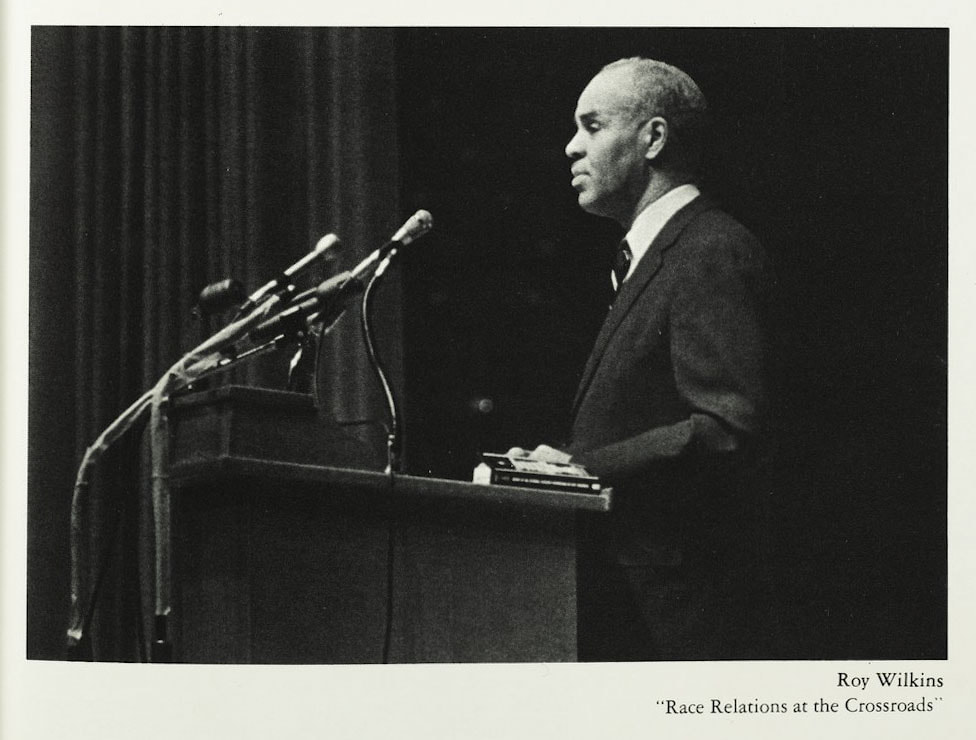 Roy Wilkins, "Race Relations at the Crossroads," The Corolla, 1969, University of Alabama.

Roy Wilkins, a civil rights leader who denounces violence, rioting and black power, will speak on “Race Relations at the Crossroads” on the Emphasis program Thursday night.
The executive director of the National Association for the Advancement of Colored People will highlight that day’s program, which begins at 7p.m.
Wilkins was named to his present position in 1955. He joined the NAACP staff in 1931 as assistant executive secretary and while serving in that capacity was also editor of “The Crisis,” NAACP monthly magazine from 1934-49.
He was acting secretary of the organization from June 1949 to May 1950, and served as administrator from 1950 until his selection as director in 1955.
Wilkins was born in St. Louis, Mo., in 1901, but grew up in St. Paul, Minn. There he finished public school and took his degree in sociology from the University of Minnesota in 1923.
At the U. of M., he served as an editor on the Minnesota Daily and was secretary during his senior year of the St. Paul branch of the NAACP.
After graduation, he took a job with the Kansas City (Mo.) Call, a Negro weekly paper, becoming managing editor before leaving the paper in 1931.
Wilkins has served as chairman of the Leadership Conference on Civil Rights since its establishment in 1949.
This is a coordinated body for over 100 national civil rights, labor, religious, civic and fraternal organizations working to advance civil rights through governmental action at the national level.
In March 1967, Wilkins received the Freedom House Award for furthering the cause of human liberty.
Under his leadership the interracial membership of the NAACP has grown from some 240,000 to 440,000 in 1966. From its founding in 1909, it has come to include 1700 branches and youth groups in 50 states and the District of Columbia.
The largest civil rights organization in America, the NAACP has encouraged the use of lawsuits, legislative lobbying, propaganda, protest meetings and picket lines as opposed to open violence.
Wilkins himself has denounced on several occasions those who feel violence is a just weapon.
He has attacked “the same old threadbare excuses to cover up for pure, unadulterated, vicious crime.”
In assailing those whose rioting has destroyed millions of dollars in property and taken numerous lives in this country, Wilkins is quoted:
“The millions of striving, law-abiding Negroes whose achievements and entire futures are endangered must speak. It is not fair that all Negroes should be condemned and restricted because of the acts of a few.”
He has labeled the “black power” movement as “a reverse Ku Klux Klan.”
Wilkins writes his own speeches, in addition to a weekly cyndicated [sic] column for the Amsterdam News, a Negro weekly newspaper published in New York.

Civil rights leader Roy Wilkins called for a change of attitude toward race relations in an address here Thursday.
The NAACP executive director was applauded wildly when he refused to speculate on the expected summer riots, saying “Riots are just bad business and it is the duty of every one of us to work against and stop them.”
He explained the problems of civil rights to an estimated 750 people attending the first night of “Emphasis, ‘68” program in Memorial Coliseum.
“Our nation is moving toward two separate societies,” Wilkins said, “one white and one black. The most fundamental cause of this is the racial attitude of white toward black and of black toward white.”
A leading adversary of Black Power, Wilkins gave warning when he said, “Negroes are here to stay and, like it or not, you must accept that fact. Furthermore, you don’t want to get rid of them, so you might as well as learn to live with them.”
Wilkins pointed out four major areas as “surface causes” of racial problems – employment, income, education and housing.
“Basic to all discontent are the attitudes of the nation’s people, both black and white and from Bangor, Me., to Dothan, Ala.,” Wilkins continued. “This is where the real change must come before any true progress can be made.
“But in the end, progress will come if it is baked by the resources of new attitudes, new understanding and above all, new will.”
Wilkins defined the problem of minorities as belonging first to the cities, since 73 per cent of the Negro population lives in metropolitan areas.
“We have found that most of our problems stem from the Negroes’ sheer lack of knowledge of how to go about city living,” Wilkins said. “The Negro doesn’t know where to take his complaints, often not even knowing where the city hall is.”
Wilkins cited surveys showing a growing demand among Negroes for better police protection. “The talk is of crime in the streets and they say ‘we’re going to protect you from the Negroes.’
“But the vast majority of Negro crimes are committed against Negroes,” Wilkins emphasized.
He was awarded a round of applause when he said “any man running for president of the United States is pulling your leg when he talks about keeping the Negro off.”
Wilkins condemned racism, black or white, as evil and lambasted “people who talk about taking over and who preach hatred. This is Hitlerism, not democracy.”
He has been quoted earlier as saying, “No matter how endlessly they try to explain it, the term ‘black power’ means anti-white power.”
Black militancy, however, is entirely different as explained by Wilkins. “Rather than preaching racial hatred, black militants support the development of racial pride and of political and economic strength from within their own group.
“They say I’m too slow and the NAACP is too slow, but this is how it should be – they should be out front just as long as they maintain an appreciation of what they have to do.”
He placed much of the responsibility of the plight of the Negro on the South. “After all, it was the South who imposed restrictions on the freed slaves.
“The South is responsible for restricting the job mobility of former slaves, giving them no incentive to move up in promotions and therefore no real incentive to stay on the job.”
When automation forced the Negro to go North for work, he “was dumped on the labor market without skills and equal job opportunity, without the right of full education and without the right to vote.
“Honest Southerners acknowledge this,” Wilkins said, “but others just say it’s ‘too bad about the riots they’re having up there,’ having shipped their troubles away.”
But the implications of hope is there, he concluded. “Things are changing ever so slowly  - the pace even slower in the South. And it’s the South that belongs to all of you – you must share it with each other like one big, happy family.”
In praise of the National Advisory Commission on Civil Disorder, Wilkins made the following points on the major problem areas it defined.
On unemployment: “The whole business is shot through with racism Negro unemployment is twice as high as that of the white community.
“With 10-15 per cent unemployment, the Negro must have a high tolerance level, or he can live on a lot less, or he riots.”
On income: “The average income for the Negro in 1966 was $3,000 less than that of the white man and the gap between the black and white is widening.”
On education: “The school establishment in this country is one of the greatest obstacles to the Negro getting a fair education. The South is beginning to change, but the North is simply going through the motions.
“Negroes are merely passed on up through the grades rather than being promoted on their ability. As high school graduates they are crippled, some still reading on a fifth grade level.
“They are cheated by having been denied the tools for reasoning out their own position.
“Education in this country is in need of complete revision. The curriculum must be changed, as well as teaching methods altered, if the Negro’s particular situation is to be understood in the educational community.”