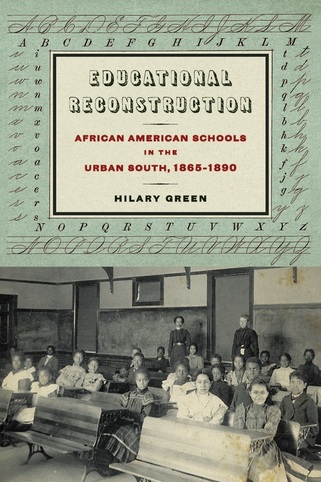 Reviews
“… A significant contribution to our understanding of the long Reconstruction era, and to the origins of Booker T. Washington's ascendancy.” - Mike Fitzgerald, St. Olaf College

“Green, by providing so much detail, has given today’s urban schools activists a road map for change and perhaps the motivation to believe that their work will have a significant impact despite the naysayers and those who do not value the education of African American youth.” – History of Education

“By providing a municipal view of African Americans' roles in shaping southern public schools during and after political Reconstruction, Green sheds important light on the factors that determined the extent of educational progress.” - The Journal of Southern History

"Green’s revised chronology of Reconstruction and meticulously researched book increases our understanding of the postwar efforts made to advance African American education. It motivates readers to want to learn more on the subject and should be required reading of anyone interested in our American past, African American education, and how ordinary people can do extraordinary things even when given only the slimmest of chances." - History of Education Quarterly

"In addition to her tenacious primary research, Green also distinguishes herself with her organized and accessible prose." - Journal of African American History

"During this twenty-five-year-period in the post–Civil War era, the credo that education was a right of citizenship informed African American activism. African Americans remained resilient and adaptable as they fostered networks and alliances. Educational Reconstruction is thus a timely reminder of the power of education to bring about individual, collective, and societal transformation." - Journal of the History of Childhood and Youth

Book/Edited Volumes In Progress:
Unforgettable Sacrifice: African American Memory of the Civil War
This in-progress second book manuscript focuses on how African Americans remembered and commemorated the American Civil War and its legacy. Contributing to a large body of scholarship, it seeks to recognize the underappreciated role of diversity within the African American community in shaping memory. African Americans experienced the war as enslaved and free, but also as soldier, contraband, and/or civilian in both the United States and the Confederate States of America. As a result, geographic place, status before war, gender, and wartime experience produced a rich tapestry of collective memories that are not neatly encapsulated within the traditional scholarly categories of Emancipationist, Reconciliationist, or even the Won Cause. Rather the case studies presented in this volume seek to demonstrate the origins, diversity, and evolution of Civil War memory among everyday African Americans. Unforgettable Sacrifice will argue that African Americans, whether nationally, regionally, and/or locally, sought a usable past that honored the service and sacrifice of veterans, the diverse wartime civilian experiences, and the destruction of slavery to advance communal notions of patriotism, democracy, and their full inclusion as American citizens.

The Civil War and the Summer of 2020: Race, Violence, Resistance and Memory in the United States, edited with Andrew L. Slap, submitted and under review with Fordham University Press.