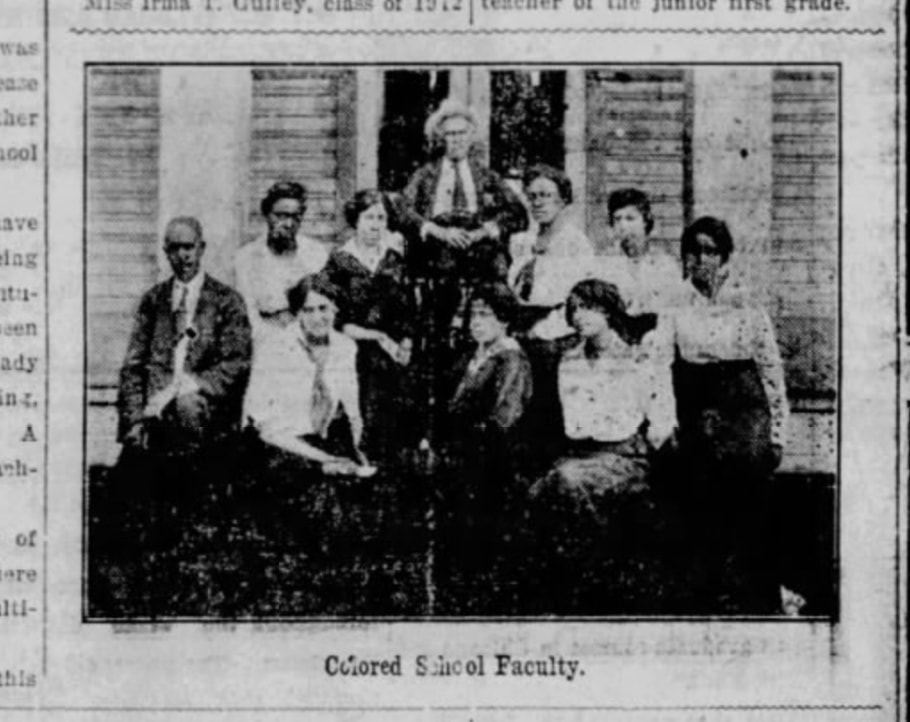 Started during Reconstruction era, African Americans had several educational opportunities in Tuscaloosa. The transcribed newspaper articles below provide insights on the history of the public schools, work of Jeremiah Barnes and other administrators, the various faculty and various school activities during the Jim Crow era.

Jeremiah Barnes, the principal of the colored public school has made application to the state examiner for a life certificate as teacher.
Professor Barnes has taught in Tuscaloosa for twenty-seven years. For sixteen years he has taught in the public school and previous to that time he had a private school of his own. His record is excellent.
It has been made a law that when a teacher has taught in the public schools of the State for ten years, he is entitled to a certificate which qualifies him for life as a teacher, and he need stand no further state examination.
It is probable that Professor Barnes will be granted his life certificate.

The Times-Gazette had recently a notice of a letter and a book sent by Mr. Robert C. Ogden, president of the Southern Educational Board, to Jeremiah Barnes, principal of the Tuscaloosa Colored Public Schools, in remembrance of the flowers presented to the Ogden party on the occasion of its visit to Tuscaloosa in 1904.
In acknowledging the book, Jere mentioned to Mr. Ogden the efforts the school was making to establish a library. He has just received Mr. Ogden a box of books to be placed in the library. The volumes number 100 and are of a varying character. This liberal gift was gratefully received and is much appreciated.

The 20th annual closing exercise of the colored city Graded Schools will be held May 20-25, 1906.
The annual sermon will be preached Sunday, May 20th, by Rev. J. J. James, at the A.M.E. Zion Church. Music by the Mozart Choir, Prof. B. H. Barnes, Director.
The annual examination and inspection of school work in the various class rooms will be held Wednesday the 23rd, from 9:30 to 12 o’clock.
Wednesday evening at 8:30 concert at M and L Hall by the primary grades. Admission 10 cents-the proceeds fro the benefit of the School Library.
Thursday the 24th, Grammar Grades, Graduating class of 1906 8:30 p.m.
Following the programme:
Music-Joy to the World the Lord has Come-School.
Invocation.
Music-Let the Hills Rejoice With Song-School.
Salutatory-Three Essentials to Good Citizenship-Louise B. Woods
Oration – Beauty in Labor-Elbert Franklin
Music-The Ocean Spray-School.
Address-The Value of the Present-Annie L. Ferguson
Address-Refinement-Adah E. VanHoose
Address-Paul Lawrence Dunbar-Lizzie E. Walthall.
Music-Loyal Song-School.
Address-Our Public Schools-Ruth Oliver.
Address-The Wonders of Nature-Mary Williams.
Address-Our Country of today-Nevada Ward.
Valedictory-Education the Means to an End - Emerline F. Alex.
Presentation of Certifications-Hon. F. G. Blair.
Report of the pupils Highest  in Scholarship and Attendance-by the Principal.
Annual Address – Rev. B. Crawford.
Music-Stepping Together-School.
Remarks.
Benediction.
Class Motto – Help Others.
Promotions will be made Friday morning, beginning at 9 a.m. at the School building.
The annual reception will be held at the hall Friday evening, the 25th at 8:30 o’clock.
Jeremiah Barnes
Principal.

Source: “The Program of the Closing Exercises of the Colored School,” The Tuscaloosa News, May 19, 1909, 1.

The opening of the colored public schools on Monday exceeded the previous enrollments for several years. The enrollment for the first week as 235 which indicates a larger enrollment than every that for last term was 451.
The opening exercises were held at the First African Baptist Church and were well attended.
A very appropriate program was carried out, and interesting addresses were delivered by the pastors of the various colored churches, and others.
The first faculty meeting was held at the school building on Saturday the 28th inst.
Plans were laid for school improvement on all lines as the faculty has been increased to ten.
Benjamin H. Barnes – Teacher in the high school.
Jeremiah Barnes – Principal and 7th grade.
Pearl Crawford – 6th grade.
Ethel Smith – 5th grade.
Fanny Tutwiler, Sen. – 4th grade.
Carolyn Barney, Jun.-4th grade
Gesner Jones – 3rd grade.
Mattie Pope – 2nd grade.
Alice Cooley, Sen.-First grade.
Eliska Jones, Jun.-First grade.

Prof. Ciero C. Simmons, Southern Traveling Financial Agent for Tuskegee Institute, the famous school headed by Booker T. Washington recently came to Tuscaloosa where he will be for ten days for the purpose of meeting those who attended that school and for the further object of soliciting help for that institution. For a number of years Prof. Simmons has been traveling throughout the South in behalf of the school and he says that he finds most of the Tuskegee people everywhere making good, and that white and colored people have contributed encouragingly to the work being done at Tuskegee.
On next Friday night the 23rd inst., with the cooperation of local white and colored friends of the school Prof Simmons expects to hold a grand educational and musical rally in behalf of Tuskegee. The admission will be free.

The Tuscaloosa colored county institute which is now in session at the colored public grammar and high school, has enrolled 47 teachers. State supervisor James L. Sibley spent Tuesday night and Wednesday morning with the teachers, urging the placing in the schools, industrial training. A splendid stereoptician lecture was given by him Tuesday night at the First African Baptist Church. His pictures dealt mainly with the farm and rural life of negroes in Alabama. The institute is under the direct supervision of County Superintendent Hughes, who is dividing his time with the two meetings. A. H. Parker, of Birmingham, is the conductor assisted by Orlean D. Kennedy, also of the Birmingham public schools. Prof. Jeremiah Barnes of the local schools is seeing to it that the teachers are properly cared for. The majority of the colored teachers of Tuscaloosa county are holders of first and second grade certificates, a condition that obtains in very few counties.
A big mass meeting is being planned for Thursday night at which a few of the leading white people of Tuscaloosa will talk, also health talks, from the local negro doctors will be made. To this meeting the public is cordially invited.

“The Segregation of the White and Negro Races” was the subject of discussion at a meeting held under the auspices of the Tuscaloosa County Farmers’ Union at the court house here Saturday. Prof. James Henry Foster, president of the county union, presided at the meeting. A number of able and practical addresses were made by the speakers who were Dr. Lee Bigood, head of the department of economics and sociology at the university; Messrs. J. Steve Yervy, J. T. Bealle, Dr. L. O. Dawson, James Rice, E. L. Dodson, and two local negroes, Dr. B. B. Mitchell and Benjamin Barnes.
A large crowd attended the meeting and much practical good is expected to result from the friendly discussion of the subject.

The regular monthly meeting of the association was held at Central negro school building last Friday evening. Principal Jeremiah Barnes and his faculty and Nellie Thompson, president of the association with a large number of mothers and friends, all being members of the association-discussed plans for the improvement of the school, by introducing sewing, cooking and gardening with other constructive work later on.
Sewing has already been taken up, and is now being taught each Friday afternoon in all grades. Plans have been agreed upon for taking up cooling and preparing for gardening at once. The city has donated a plot of ground convenient to the school for a garden.
A neat little sum was donated at the meeting as a beginning for the purchase of a cooking stove. The association has taken hold of the work in earnest and the members are very enthusiastic in the plans for the industrial improvement of the negro schools.

An interesting song service was held at the Shiloh Negro Baptist church Sunday afternoon .The excellent choir of that church, under the direction of Benjamin Barnes, gave a very interesting program consisting principally of the plantation religious melodies, including It’s Me, Oh Lord; Don’t You Let Nobody Turn You Round, and Over in the Glory Land, all of which are full not only of melody but also of homely philosophy.
At the request of a number of white people who have heard this choir, a special song service, at which a section of seats will be held in the near future.

Prof. Jeremiah Barnes, one of the best known colored men in Tuscaloosa is dead. For many years he was the superintendent of the colored public schools of this city and has done a great work among his people.
Prof. Barnes commanded in a very high degree the respect and confidence of the people and devoted the last thirty years of his life to the uplift of his race. He believed the best way to elevate his race was by education and he devoted himself to educational interests on the account.
Prof. Barnes believed in the two races living in harmony and all of his teachings were along that line and he has been a great power of uplift for his people in this city and section on account of his earnestness, his sincerity and the manner in which he put his convictions into practice.

The annual May Festival of the West End school will be held on Stillman Institute lawn tomorrow afternoon at 4 o’clock. Under the direction of Miss Susie Mae Smith a series of physical exercises, drills, marches, etc., will be presented and the crowning of the May Queen will be one of the chief events. A Maypole dance will give pleasure and there will be all sorts of things for sale, the money to be used in school improvement. The presence of the public will be appreciated.

Vandals last night broke into a vault in a negro cemetery here and set fire to the coffin of Jeremiah Barnes, one-time negro alderman and school principal who died in 1915.
The fire burned the casket of Barnes and that of his wife before being discovered. Police found several struck matches around the vault.
Barnes represented a negro ward on the Tuscaloosa board of alderman in 1874.