Tuscaloosa Schools During the Jim Crow Era: "The Negro Race of Tuscaloosa," 1913 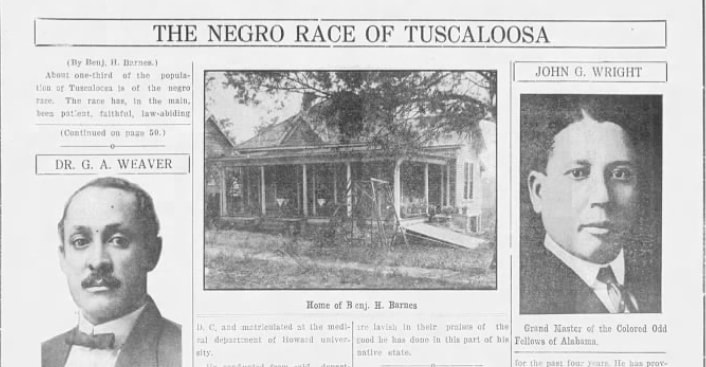 In its August 21, 1913 edition, the local Tuscaloosa newspaper showcased white and black leaders of Tuscaloosa. By highlighting a few African American men and piece written by Benjamin H. Barnes (1878- Dec. 25, 1927), the Tuscaloosa News acknowledged post-emancipation success of the African American community. Moreover, the profiles of Drs. Weaver and Brown, photographs, and advertisements suggest a thriving community centered on its churches, its schools, and middle-class professionals. Below are select transcriptions of the Tuscaloosa News special feature.

Document 1: "The Negro Race of Tuscaloosa" by Benjamin Barnes

About one-third of the population of Tuscaloosa is of the negro race. The race has, in the main, been patient, faithful, law-abiding [break 56] and unresentful. Loyalty in the past to the white race has been its chief asset. The future will show if possible even more loyalty. The race will ever stand by its white friends with a devotion that no foreigner can approach; and ready to lay down their lives if necessary, in defense of them.

No Race Problem in Tuscaloosa.

The two races go about their duties in perfect peace and happiness. In business the negro has been given a man’s chance, and he has made much progress in that line. Negroes are conducting grocery stores, modern cafes, undertaking establishments, insurance business, barber shops, pressing clubs, blacksmith shops, woodyards, upholstery shops, a jewelry and printing establishment, etc. In the professions, there are three physicians, two dentists and several teachers and ministers of the gospel.

The negro citizens of Tuscaloosa are blessed with a well regulated system of public schools containing a high school department. Superintendent James Henry Foster (white) has charge of the colored schools as well as of the white schools, and they rank with the best of the state. Last session Jeremiah Barnes, principal, and nine assistants taught in the city colored schools.
Churches.
The colored churches of Tuscaloosa compare favorably with those of the larger cities of the state. Two of them are especially admired, by those who visit the Oak City. The white citizens assist the colored citizens in all their worthy endeavors. No better condition can be shown anywhere. Many colored citizens own nice homes.

The institute for negroes, established by the Presbyterian church, with all white professors, has been a great power. It has trained and sent out many missionaries abroad. There are but few people who have not heard of “Stillman” or felt its influence. The institute was organized, primary, for the education of colored preachers and teachers. It has proved a blessing.

In this same section, Dr. Weaver and J. B. Brown are profiled in separate biographical sketches. Photographs of Weaver, Barnes’s residence, and John G. Wright, operator of a city barbershop are included. There is also a half-page advertisement celebrating Wright’s business as evidence of black entrepreneurial class and racial progress during the 50th anniversary of the Civil War celebration.

Dr. G. A. Weaver, (the son of Lawrence Weaver), was born in Tuscaloosa on the corner where Dr. Williamson and Faulk have their sanatorium. He went to different schools (both public and private) left Tuscaloosa, entering Talladega college in 1887 from which college he graduated in 1892. He then made principal of the city school of Gadsden, and taught there one year after which he went to Washington, D.C. and matriculated at the medical department of Howard University.
He graduated from said department in 1897, and after a year he came to Tuscaloosa, took the state examination, passed with credit to himself and at once began an active practice in his own home town.
He has always been an enthusiastic worker for a greater Tuscaloosa and no one has ever met him without having heard something of the advantages of Tuscaloosa.
He has the confidence and respect of all the people of Tuscaloosa, and all the white physicians give him the credit of upholding the dignity of the profession.
His people are proud of him and are lavish in their praises of the good he has done in this part of his native state.

Prominent among the members of his race is Dr. J. B. Brown, dentist, who has been a citizen of Tuscaloosa for the past four years. He has proved a valuable asset to the negroes of Tuscaloosa, has rendered good service. His well-equipped offices are at 2314 Seventh Street. Telephone 501.